BOOK REVIEWS: Oppose and Propose!
Lessons from Movement for a New Society

Andrew Cornell’s Oppose and Propose offers an extraordinarily well-researched examination of the 1971-1988 US-based organisation Movement for a New Society (MNS). 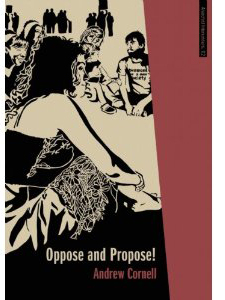 Cornell mixes documentary evidence and interviews with key participants in MNS [Movement for a New Society: Training, vision, strategy more ] to provide a comprehensive account of the movement, from its roots in Quaker anti-war groups through 17 years of rich and varied history, during which MNS was the only US-wide organisation explicitly advocating and working towards nonviolent revolution [with a network of activist partners on every continent].

Cornell’s book has two aims. The first is to register MNS’s place in the peace movement’s heritage. Many aspects of the contemporary movement, including activist training, consensus decision-making, collective living and large-scale direct action campaigns comprised of small affinity groups, were developed and popularised by MNS.

Perhaps most significantly, the emphasis the group placed on personal growth, helping one another deal with classist, racist, sexist and hetero-normative privilege and oppression, is now far more common.

Cornell is also keen that we should learn from MNS’s limitations and mistakes, as an explicit experiment in anti-authoritarian, nonviolent revolution. [That] message comes from the fascinating interviews in the middle section of the book (with George Lakey’s contributions offering particularly powerful insights).

The key lessons concern the overuse of consensus decision-making (which, while powerful at times, made the organisation conservative in the long run), and the tensions between those members who wanted to focus on the utopian, collective living project, and those whose focus was more squarely on political organising.

These are problems which all can be found in today’s movements. This book by, about and for activists, offers fertile ground for rethinking these questions… and learning from past experience. MNS is an important and interesting organisation about which we know too little.

Cornell’s book undertakes the difficult task of capturing their experiment with remarkably-clear style, and a generous but firm analytical perspective. From the spectacular direct actions to the everyday interactions, the movement is presented as a powerful resource, from which we would do well to draw as much inspiration and caution as possible. PN

In the early 1990s, my comrade Melissa and I visited our first War Resisters League National Committee meeting. WRL drew us in with its history of anarchists and socialists who, like us, saw pacifism as central to lasting revolution.

What impressed us most at the meeting was the complex consensus process called a spokes-council, where power flowed from coordinated small groups to a synthesis process. Here was an organization that was resisting the war state, and its consensus seemed to prefigure the anarchist society.

This book provided me with a context to my first WRL experience with consensus. It traces the history of the Movement for a New Society (MNS), which first popularized this kind of complex consensus in the 1980s, from which, in many ways, the anarchist peace culture we encountered was a direct descendant.

Oppose and Propose! is divided into a historical narrative, interviews with George Lakey and other MNS peace veterans, historical documents, and a conclusion.

MNS, Cornell writes, was a resistance community founded in Philadelphia in 1971. It was a radical outgrowth of a Quaker antiwar group and quickly came to encompass a far-reaching vision of integrating resistance and alternative institution building. The intention from the outset was to be a living laboratory of consensus process, intentional community, and radical resistance to war and imperialism. How far any of these were successful, or led to internal problems, is the heart of the book. Learning from our own history seems to be one of the author’s main motivations.

In the life of MNS, the successes loom large, including its powerful influence on the antinuclear movement and the successful blockade of a military ship in Baltimore Harbor in 1971.

One of the major threads of the book is how MNS incorporated old and new consensus techniques into its work and pushed the possibilities of such a process to its limits. While consensus was originally a galvanizing force in MNS, there was a sense that it led to a certain rigidity. Toward the end, a basic introductory flyer to MNS, to be revised by full consensus, took two years to update!

One former member describes how tensions grew between activists and community builders. Some perceived MNS as being too “Philly-centric” at the expense of being an effective national movement. Also, MNS originated out of a largely Quaker peace culture that was predominantly white and middle class. Although there were notable members of color, the organization, despite its best intentions, remained locked in that history and largely failed to make itself relevant to activists of other histories. By 1988, these various tensions had taken their toll on the organization, and MNS, by consensus, laid itself down.

Cornell observes that after MNS was laid down, its legacy lived on, most notably in the anarchist and antiauthoritarian left. Although most anarchist organizers today may not embrace radical nonviolence, Cornell contends that the best parts of the MNS legacy are felt in these organizers’ principled use of consensus process and affinity groups, with a sense that our decision process today should reflect the direct democracy of the future. He claims that the long shadow of MNS can be found in the great moment of the WTO uprising of 1999.

My desire to read this book stemmed mostly from my interest in anarchist pacifism. When I heard that the book was concerned with anarchism, I was a little skeptical, wondering if the author would be reading anarchism “into” an essentially liberal action group, based on its use of civil disobedience.